In the first scene of my novel, Despite the Ghosts, my heroine Nola has an unwanted guest join her in the shower--the ghost of a man who was thought to have committed suicide. Having a spirit materialize in the shower's steam would send the rest of us over the edge, but lucky for Nola, she's a medium. She's used to seeing ghosts, and her reaction was a mix of startled and annoyed.

Look who decided to join me in the shower this morning.

Just looking at it gives me a full-on body shudder. My reaction was a bit more over-the-top than my psychic heroine's. 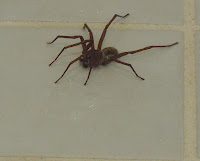 It was mid-shower when I finally noticed my unwanted guest--who happened to be hiding on the back-side of the shower step. Performing a convulsive jumping jack, I scrambled into the far corner of the shower from the beast, shrieking like a banshee.

But spiders don't have ears. The beast was unfazed by my reaction.

It's brown, slightly hairy body was roughly the size and shape of a large almond, and with his splayed legs gripping the shower tile (*shudder*) the thing looked freaking horrifying. I screamed louder, which did me no good, as I was the only one home.

"Yeah. Got you cornered, *itch," the spider seemed to be saying, his multiple myopic eyes narrowing. "Watcha gonna do now??"

Shampoo ran into my face. I flipped the water off, debating my alternatives. I couldn't kill it. Not naked anyway. What if I missed and he ran up my leg (**shudder **)? I could shower with him, and kill him when I was dressed and mentally ready. That was the mature thing to do, I reasoned with my inner arachnophobic. I was much bigger, and he was unlikely to rush me while I finished my shower.

He'd just be staring at me with all those eyes...planning his next spidey move.

Two seconds later, I karate-chopped the door open and performed an Olympic-sized long jump, hurtling over the spider, over the lip of the shower, over the bath mat until landing with wet feet on the tiles. I would have gone *ss over tea kettle, but my flailing arms caught the towel bar. I slammed the glass door closed, praying the eight-legged monstrosity couldn't climb the shower-wet walls and get out.

Streaking through my empty house, I finished my shower--on extra-hot to combat the residual spider-induced tremors. Then, like a medieval woman--when there was no knight to come and save her--I dressed, and prepared for battle.

NOTE: If you're one of those that prefers to "capture and release" the creatures that inadvertently enter your house, DON'T READ ANY FURTHER. 'Cause I don't roll that way. I leave dead carcasses outside my door as a warning --Abandon all hope, ye bugs who enter here!!

First, I grabbed my camera. Had to snap a picture of the thing for all of you. And let me tell you, zooming in on that thing will give me nightmares for a month (**shudder**). It took eight pictures before my hands stopped shaking and the picture was in focus. The lengths I will go to for my writing.

Then, I grabbed my weapon, and sprayed.

Death by Scrubbing Bubbles is not the most effective way to kill household pests. There was a lot more shrieking, foaming bubbles, and chaos before the beast finally succumbed. He was still. I had vanquished the interloper.

Plus, my shower tiles got a little extra sparkle. Dontcha love it when you can multi-task?!?

I had a moment of silence, respecting my dead foe. (Why, oh why couldn't he just have stayed outside where he belonged?) Then, I quietly closed the shower door, leaving the dead in peace. My husband would be home soon. He'd take care of it.

You didn't actually think that I would pick that thing up, did you???

And now I forge ever onward. One more obstacle removed as I quest for my...
Happily Ever After,
Dylan


Want to read an excerpt from my novel, whose heroine is braver than I in the shower? Click here for my website, or just go ahead and buy the book (and read my 5 star reviews) on Amazon.com.


Posted by Unknown at 12:04 PM
Email ThisBlogThis!Share to TwitterShare to FacebookShare to Pinterest
Labels: Arachnophobia, Death by Scrubbing Bubbles