Evil Is As Evil Does...Newtons Meet the Missionaries

I don't consider myself evil. I mean, I know I'm no saint. But evil? Nah. And my girls--well, they're closer to sainthood than I am. And that's when my kids' playdates with the neighbors changed.

Because nobody tells my girls they're going to burn in hell. 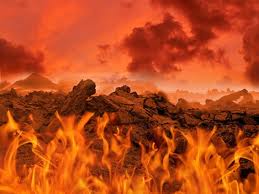 When our new neighbors moved in, we were thrilled. Given our neighbor history, we had right to be.

Our first couple of years here, our neighbors had a 20-yr old SAHS (stay-at-home-son) whose only occupation was to play X-box in his garage. In his underwear. With the garage door open. They finally built a home and moved out, and then the 'boat captain' moved in. He seemed nice...until a few months into his stay when the private investigators started a stake out down the street. He was under surveillance, and we never found out why. One day...POOF! He and his boat were gone. The house was vacant for a year when finally...

The Missionaries moved in next door.

No, I'm not name-calling. That's what they said they were the first day we met them. Missionaries. They'd lived all over the US...doing their Missionary thing, until moving in next to us.

I'm not sure of their religious denomination--I never can get a straight answer from the kids...but I think they might be Pentecostal holiness. Or maybe non-farming Amish?? Ma stays inside and cooks all day wearing long dresses, her hair in a coiled bun. She leaves the house only once a day to retrieve the mail, her legs swishing so fast under her ankle-length jumper, I worry she'll spark. Pa works as a plumber outside of the home, accompanied by their 17-yr old son. And their three youngest children (ages 9, 7 and 5) are home-schooled.

At first, I thought the kids were charming. The two girls--we'll call them Laura and Carrie--had their hair in a long braid down their back and wore long sleeves and skirts to their ankles. The 9-yr-old boy--we'll call him Albert--wore pants and long-sleeved shirts. Every day. Even when it was freaking 90 degrees.

Showing skin was a sin. And so was watching television, listening to the radio, playing with most toys, and books outside of their home-school texts and the Bible.

Having friends of many religious backgrounds, I urged my girls to respect their beliefs--don't bring out the toys with the Disney Princesses on them. Don't ask them what costumes they're wearing for Halloween (because they already told us Halloween is a holiday for Satan).

However, all the tolerance ended with this conversation between the oldest Missionary girl, we'll call her Laura, and my daughter who was 11 at the time. It was a hot December afternoon, my daughter home from school in school-appropriate shorts and tee-shirt, and Laura sweating buckets in her long-sleeved shirt, her ankle-length dress, white stockings and sneakers.

Laura: "Because I really like you, and you're going to burn in hell for all eternity."

My Girl (taken aback): "Wh-why would you say something like that?"

Laura (with a knowing nod): "Because you show your skin. And God says showing your skin makes you a sinner. And sinners burn in hell. And that makes me sad that I won't see you in heaven."

My Girl (thinking hard about all of the Bible stories she knows): "Nothing in the Bible says you're not supposed to wear short-sleeved shirts. Does it?"

Laura (changing subject): "And you have a Santa thing in your lawn. That's evil. Santa is a tool of the devil. And people who have Santas are going to burn in hell."

My daughter came inside--not weeping, exactly, but seriously distressed. After affirming for her that holy people in the Bible (same one used by the Missionaries) wore robes that did NOT cover the entire body--and presumably they weren't sinners--then us wearing appropriate summer-wear was not likely to land us in hell's eternal flames. And then we had another conversation about how we have to be respectful and tolerant of other's beliefs...even when they have no respect or tolerance for yours.

Inside, though, I was seething. Sure, I know they're only kids, but that's exactly the point. Kids are the world's best mimics--they learn by parroting back what's said to them from their first word of "Mama" to the "You're going to burn in hell because you show your skin" stage. They didn't come up with this all by themselves--they were repeating it.

Evil is as evil does. The gauntlet had been thrown.

Parroting kids work both ways. Next time the Missionary kids came over, every Disney Princess we owned was in the driveway to play with. We introduced them by name and by the end of that play session, supervised by 'Mama Sinner Newton', they not only knew the names of the Princesses, but their back stories as well. This is Belle, and she fell in love with a Beast. This is Snow White, and she lived with seven little men. Before marriage. And this....oh yes! This is Cinderella, who defied her family, snuck out to a ball, and hooked up with a Prince.

Repeat that at the dinner table, kiddos. Tell my kids they're going to hell for wearing short sleeves, will you? Because there's more where the Disney Princesses came from...

Next time they came to play, I hauled out the Barbie dolls...in all their NAKED SPLENDOR. I even brought out that little singing tramp Barbie from High School Musical, and her neutered HSM Zac-mate. And the Missionary kids played in my driveway, merrily sinning away as they dressed, undressed and re-dressed the dolls in clothing that barely covered ANY of their parts.

You want SINNER? I can give you SINNER....

Even as I live my Happily Ever After,
Dylan


P.S. We gave them all a Christmas present this year...wrapped in SANTA paper, of course.
Posted by Unknown at 1:46 PM No comments:
Email ThisBlogThis!Share to TwitterShare to FacebookShare to Pinterest
Labels: Missionary Neighbors
Newer Posts Older Posts Home
Subscribe to: Posts (Atom)