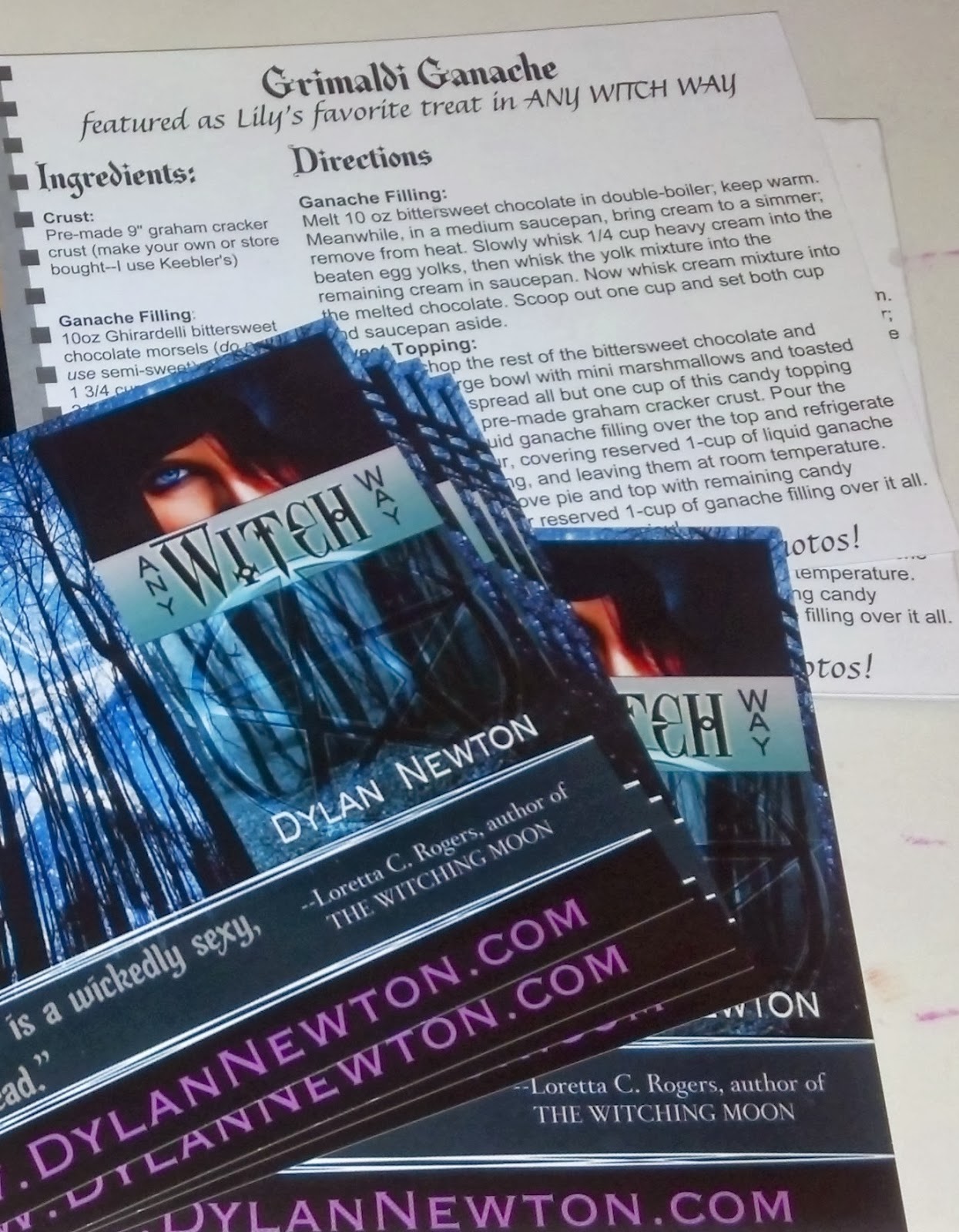 To celebrate my print release of my paranormal romance novella, ANY WITCH WAY, I am giving away signed copies of my recipe card for "Grimaldi's Ganache"--the scrumptious dessert featured in the book!

This candy-bar like pie will have your sweet tooth begging for mercy (pictures of the actual dessert can be found here)!

To get your autographed recipe card for "Grimaldi's Ganache" simply send a self-addressed, stamped envelope (with correct postage, please) to the following address:


Love Freebies? I have more...but you've got to be a part of my quarterly newsletter, the Newton Nation, to get them! Sign up by typing in your email address in the box on the right where it says "Subscribe to Dylan's Newsletter" and you'll be a part of an elite group of readers and friends who enjoy sneak peeks, insider knowledge...and free stuff!
Posted by Unknown at 9:00 AM No comments:
Email ThisBlogThis!Share to TwitterShare to FacebookShare to Pinterest
Labels: Any Witch Way, Free recipe card, Grimaldi's Ganache

I'm thrilled to have with me today a great friend and writer, Flossie Benton Rogers. Talk about an Wytchfae Runes! Now, Flossie's on book #4 in the series, Time Singer, due in April.

Flossie's story is an incredible rise to success: this lovely woman retired from her day job, attended her first writer's conference, pitched for the first time, and subsequently got a contract for her first paranormal fantasy romance--all in the matter of a couple of years! Whew!

Check out my interview with her below, and comment today for a chance to win her latest release, Mind Your Goddess.

What an incredible journey you've had, Flossie! I'm so glad to have you as a guest on my blog.
Dylan, a thousand thanks for having me here today!

What is THE most important thing writers can do for themselves to get an agent/publisher in today's market?
The most important thing a writer can do is write, write, and write some more.  Instead of obsessing over getting your first book published, write a second book, and a third, as you continue to submit.

That's such excellent advice. So many times I see authors that stop writing after one book. Ok, next question: If you could have done anything differently with your writing career so far, what would it be?
A mild regret is not starting a serious drive toward publication earlier in life. However, I’m also a big believer in things happening when the time is right. Because of that, I focus on enjoying every moment!

Well, considering how prolific you are, I'd say you've made up for lost time! Who are your writing role models, and how have they influenced you?
My writing mentor is author Loretta C. Rogers, who convinced me that I could write a novel and get it published. Before that, I saw authors as remote “rock stars” to whose rarefied status I could never aspire. Loretta began writing after retirement and in six years has 13 novels under her belt. She is published in multiple genres, and I especially like The Witching Moon. A vintage romance author I admire is Dorothy Cork. She wrote love stories set in Australia, and each one elicits visceral excitement in the reader, a fine goal for a writer. Red Diamond is my favorite of hers. As for literary works, I love the novels of Hermann Hesse, Fyodor Dostoyevsky, Franz Kafka, and Thomas Hardy; the plays of Aeschylus, Sophocles, Euripides, and Shakespeare; and the poetry of Yeats and Keats, just to name a few.

Can you tell us about your upcoming release?
I’m excited that Time Singer – Wytchfae 4 is scheduled for an April release. This is the story of a modern wytchfae, Seraphina Rosebeth Clery, and Aedar, her fierce warrior from ancient Ireland.

What's one fact about you that most people don't know.
As a teenager I played drums in a garage rock band, The Persian Blue.

No way! A drummer in a rock band. You are truly amazing, Flossie!  Check out her awesome book video trailer for MIND YOUR GODDESS – WYTCHFAE 3 here:
http://www.youtube.com/watch?v=e1gdw7kq4aY
and dont' forget to comment at the bottom of this post for your chance to win a copy of this super fun, super hot paranormal fantasy romance!

The Goddess Epona awakens in the Roaring 20’s. Can this flapper summon the razzle dazzle to reclaim her powers and the heart of her dark Guardian?
Mind Your Goddess Excerpt:
“Lady?” A hand tapped her shoulder and she forced herself to open her eyes. A man with slick black hair who was dressed to the nines in a dapper lightweight suit of a long ago style, knelt beside her.
Relieved that the innate fae power of understanding languages had not deserted her, she whispered, “Who are you?”
“I’m Benny.”
“Where am I?”
“This is sunshiny Florida.
“What year is it, Benny?”
“1925. Say, are you in trouble? Do you need a sawbones, or did you jump overboard?” His tone held a note of jocularity that made her wince. Still, if he could get her out of this blaring sun until she had the strength to heal her weakened condition, she could withstand his cheerfulness.
She bit down hard on her lip. Not only had her abductors catapulted her down to the human dimension, they had pitched her back in time. “Please, help me up.” The wispy quality of her voice shocked her.
Instead of assisting her to rise as she expected, the man snapped his fingers twice, and a younger, brawny man trotted over. “Yes sir?”
“Be a gentleman and help the lady. Put her in one of the cabins—Margie’s.”
Epona didn’t like the sound of that but figured once inside and away from the blinding sunlight her head would stop hammering with such violence and she could check on her Goddess crystal. Using considerable effort, she assisted the beefy young man as he got an arm under her and raised her to a standing position.
Although her legs seemed to be made of jelly, with his support she was able to untwist the sodden gown from her legs. Patting her salt stiffened hair, she murmured, “I must look a fright.”
“Not at all, cupcake.”
The hell with it. Her appearance was the least of her worries. When her wobbly legs buckled, and before she could utter a protest, her rescuer scooped her up into muscled arms and plodded through the white sand toward a bright yellow building set back from the beach. He continued around to the back where a row of neat cottages stood.
The black haired man followed and when they came to a door, he knocked in a rhythmic rat a tat tat. Some kind of secret code, she thought. The door swung open to reveal two other stocky men. “Oh, it’s you, Benny.”
“Of course it’s me. Didn’t I give the knock, moron? Break’s over. Quit your yammering and open the bedroom door.”
A few moments later, after more chattering and remonstrations from Benny, Epona reclined on a narrow cot with no headboard. Propped up atop scrawny pillows and covered with a thin blanket, she took stock of her rescuers, while Benny eyed her from just inside the doorway. The other men peered over his shoulder. “What’s your name?”
She didn’t answer him.
“Muddled melon, huh? Well, never mind, we’ll call you Angel for now. You kinda look like one in that getup, or a bride. There’s not a hot-headed groom on the warpath behind you, is there?”
Her fae ability with languages apparently wasn’t working at full throttle after all. Although she didn’t fully comprehend what he meant, she responded to his questioning look with a fervent shake of her head.
“Good. You either need to dry off or dry out. Which is it?”

Bio:
Flossie Benton Rogers is the author of the paranormal fantasy romance Wytchfae series. A fifth generation Floridian, she is a former teacher and library director who enjoys spending time with family and seeing new places. She is always on the lookout for romantic, adventurous story ideas to share with readers. She began writing fairy tales as a child and is grateful for the opportunity to again pursue her passion by writing about faeries, demons, angels, goddesses, witches, dark guardians, ghosts and other magical beings.

Dylan, thanks again for being a super hostess!

Flossie--I so enjoyed our interview together! Thanks for being a guest today, and for those of you visiting, please comment below for a chance to win a copy of her latest book!

Happily My Ever After,
Dylan
Posted by Unknown at 6:49 AM 14 comments:
Email ThisBlogThis!Share to TwitterShare to FacebookShare to Pinterest
Newer Posts Older Posts Home
Subscribe to: Posts (Atom)